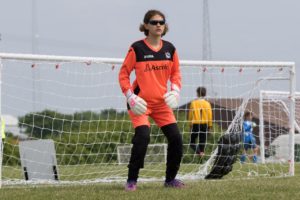 Phoebe came into the academy 6 months ago a really raw, beginner female goalkeeper.

Phoebe began on a group session and, after demonstrating great understanding in terms of learning and commitment, she has now progressed to an advanced session.

In June, Phoebe won ‘Goalkeeper of the tournament’ progressing to the last stages with a string of fine performances before saving 2 penalties in the final.